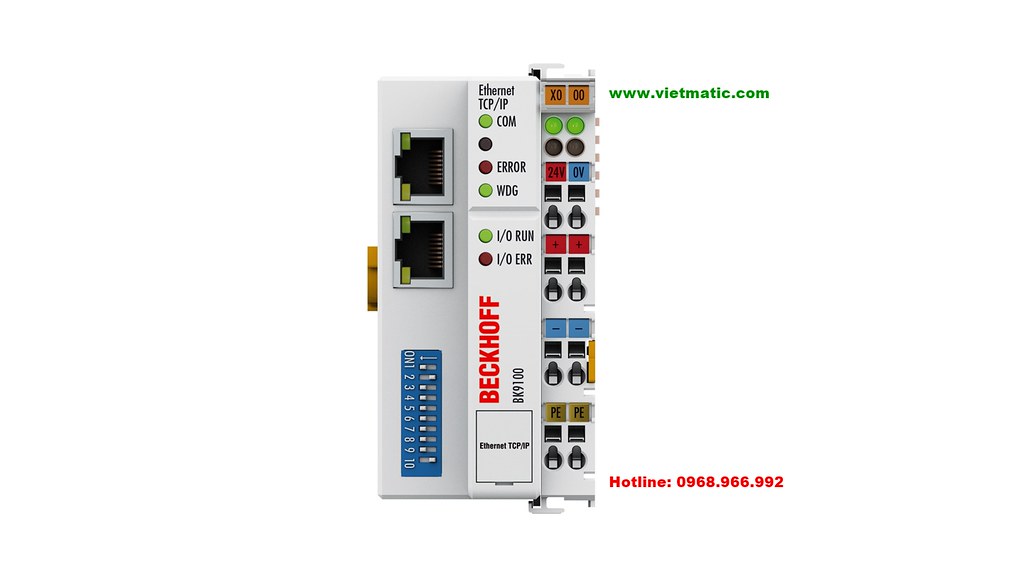 The BK9100 Bus Coupler connects Ethernet with the modular, extendable electronic terminal blocks. One unit consists of one Bus Coupler, any number from 1 to 64 terminals and one end terminal. With the K-bus extension, up to 255 Bus Terminals can be connected.

The Bus Couplers recognize the terminals to which they are connected, and perform the assignment of the inputs and outputs to the words of the process image automatically. The BK9100 Bus Coupler supports 10 Mbit/s and 100 Mbit/s Ethernet. Connection is through normal RJ45 connectors. The IP address is set on the DIP switch (offset to a freely selectable start address). In networks with DHCP (a service for the allocation of the logical IP address to the physical node address [MAC-ID]) the Bus Coupler obtains its IP address from the DHCP server.

Unlike the BK9000, the BK9100 has an additional RJ45 port. Both Ethernet ports operate as 2-channel switches. The I/O stations can thus be configured with a line topology, instead of the classic star topology. In many applications this significantly reduces the wiring effort and the cabling costs. The maximum distance between two couplers is 100 m. Up to 20 BK9100 Bus Couplers are cascadable, so that a maximum line length of 2 km can be achieved.