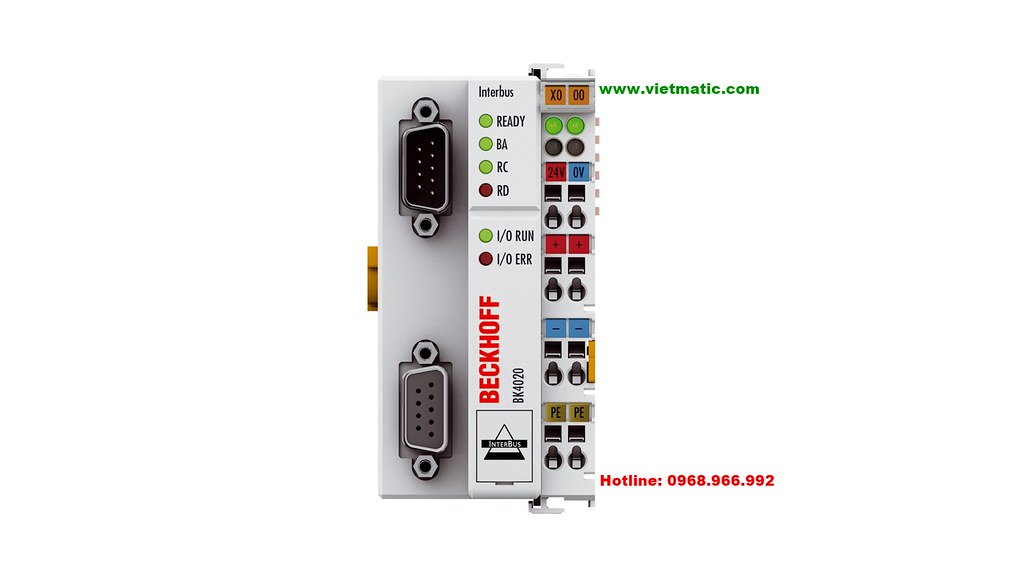 The BK4020 “Economy plus” Bus Coupler connects the Interbus bus system to the electronic terminal blocks, which can be extended in modular fashion. One unit consists of one Bus Coupler, any number of up to 64 terminals and one end terminal.

With the K-bus extension technology, the BK4020 allows the connection of up to 255 spatially distributed Bus Terminals to one Bus Coupler. The “Economy plus” coupler supports all Beckhoff system Bus Terminals and can process 512 bit digital inputs and outputs per slave. The number of analog channels is limited by the Interbus protocol to a maximum of 32 input and 32 output channels. The transmission rate is 500 kbaud. Slave devices can be spaced up to 400 m from each other as the fieldbus interface acts as repeater. The overall length of an Interbus ring is limited to 13 km.

The identification code and the length code are determined by the Bus Coupler automatically after starting, depending upon the connected Bus Terminal, and are read out by the master. It is not necessary to parameterize the slave.

The Bus Coupler recognizes the connected terminals and automatically generates the affiliations of the inputs/outputs to the bytes of the process image. The first input/output signal is inserted in the first bit of one word (LSB), beginning from the left. The Bus Coupler inserts further signals in this word. Inputs and outputs are clearly separated.

Interbus has been established as an open fieldbus system since 1987. Interbus has a ring structure, and up to 256 stations can be operated in a ring. Data transmission takes place at 500 kbaud. Due to the efficient data transmission, sensor and actuator data can be transferred over great distances.

The Interbus coupler works with the protocol chip SUPI3 and supports the extended diagnostics of the Interbus master. Byte-by-byte addressing in the master is supported as from generation G4.